The Junior League of Pittsburgh’s scholarship program recognizes female students who are excelling inside and outside of the classroom. Applicants served as active volunteers, completing at least 100 hours of community service during their academic careers.

Awarded for three years in memory of our beloved Wear After Shop employee.

Junior League of Pittsburgh scholarships support female college students whose studies focus on the causes and impacts of food insecurity.

The 2019 scholarship period has ended. Please check back in early 2020 for application submission information.

The League awarded a $1,500 scholarship to Megan McElhaney (seen here with her dog, Hugo). Our annual college scholarship goes to a student who’s studying childhood food access, and Megan is working on two master’s degrees at the University of Pittsburgh: one in social work with a concentration in community, organization and social action and the other in public administration with a concentration in nonprofit management. Her plan is to graduate in spring 2019. 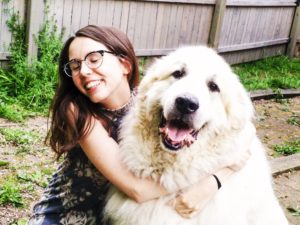 Megan’s resume reflects her passion for helping others: Jonas Salk Fellow at Pitt, former school food policy intern with Just Harvest, AmeriCorps Keys Service-Corps member. Through these experiences, she oversaw the implementation of the Child and Adult Care Food Program at a local YMCA; conducted extensive research on Allegheny County school systems and their meal and nutrition policies; strategized with organizations concerned about food insecurity; developed lesson plans on nutrition, gardening and sustainability; and tutored or mentored over 130 kids ranging in age from 6-16.

“I took a really great class about the intersection of gender and food politics, and it completely changed the way I thought about hunger,” Megan said. “For the first time, I understood hunger as a symptom of poverty rather than a problem that exists in a vacuum. I truly believe that access to adequate portions of nutritious, delicious food is a basic human right, and the fact that not everyone is given that access is outrageous to me. The politics of food are intertwined with so many other social issues — education, healthcare, environmental issues, socioeconomic divides. All of this makes it difficult to tackle food insecurity in one fell swoop, but that just makes me more determined to help in any way that I can, especially when kids are involved.”

As we follow Megan and her studies, we’ll update you on her progress on social media. The Junior League of Pittsburgh’s scholarship program is coordinated by our community Research and Development Committee.

In addition to grant funding, there are opportunities to receive volunteer support from members of the Junior League. Grants have been awarded to applicants with programming that aligns with the Junior League of Pittsburgh’s mission and where monies will have the greatest impact. Awards will be given for program funding.

Want to stay up-to-date on what’s going on with the Junior League of Pittsburgh? Sign up for our newsletter!

By continuing to use the site, you agree to the use of cookies. more information